Here are some general ideas for color recognition, color-related literature, songs and poems.

These can be sung to the tune of “This Old Man” or written on a chart with the color words on the top line and the rest on the second line. the children could have a copy of the chart so they could trace over the letters for the color word in the appropriate color.

Use a honey bottle that’s shaped like a bear. Sit at a table and have the children sit on the floor in front of the table. Put the bear bottle (filled about an inch from the top with water) in front of a white board and put the ” magic” (food coloring and bleach) behind the board. Even if the kids watch you put in the food coloring, it’s still “magic” to them, because you make green by adding blue to yellow, etc. You may want to have a globe nearby to integrate geography. Begin the story, following the teacher directions.

Once upon a time there was a beautiful white polar bear who often visited the St. Lawrence Island in Alaska. Now on this island, you find a little schoolhouse filled with many boys and girls and their beloved teacher, Ms. Andrews.

It seems as though a neighboring child from Siberia ventured across the Bering Strait to St. Lawrence Island. Her name was Tatiana, and she had beautiful golden hair. As she explored the island, she soon met Mr. Polar Bear. The children watched out the windows of the schoolhouse as the bear wished he had golden hair like Tatiana’s. He shut his eyes tightly and wished very hard for golden hair.

Now will you just shut your eyes for a moment and help polar bear make his wish?

Now you may open your eyes! AMAZING! A blond polar bear—oh, my goodness! Do you know what the children shouted out the windows of the schoolhouse? Do you think they liked a BLOND polar bear?

Teacher gets the children to slap, slap, clap, clap, and snap and say:
POLAR BEAR, POLAR BEAR
YOU ARE A SIGHT!
YOUR COLOR WAS RIGHT
WHEN YOU WERE WHITE!

Mr. Polar Bear was MIGHTY SAD! He thought the children would like his new golden color! He climbed on an iceberg and began to think about his problem.

Now, as Mr. Bear rested, he caught a new scent in the air. What did he smell? As he raised his head and looked around, he saw a young boy coming closer. Rene was from the GREEN forests of Canada. He wore a green hat, a green sweater, green pants, and green boots. Guess what he had in his pocket? Rene had a GREEN lollipop! Polar Bear thought GREEN must be the most beautiful color in the world! Maybe he should be a green bear. He shuthis eyes and began to wish he was green. Can you help Mr. Bear?

(Teacher puts 2 drops of blue in)

Now he was a GREEN polar bear!! But the children said:

Now this made Mr. Bear feel real bad. He pouted and pouted. Polar bearbegan to walk across the snow. As he topped a big snow drift, he met COUSIN BROWN BEAR from Kodiak Island. Cousin Brown Bear had followed the path of green tears that came from polar bear. The two bears had a nice, long visit and before long, Polar Bear began to admire his SMART COUSIN. The Kodiak Bear is the world’s largest bear and gets angry very quickly. Polar Bear thinks maybe the children would like him if he were
brown instead. Let’s shut our eyes and wish with Polar Bear.

(Teacher adds 2 drops of red, and children repeat chant above)

Polar Bear felt so bad, he ran away from the children and dove in the ice cold waters of the Bering Sea. Polar bears are the best swimmers of all bears. His thick, heavy fur was now BROWN and looked quite strange as the children of Gambel watched him swim DEEP, DEEP, DEEP into the sea. Now, if you will just shut your eyes and think about Polar Bear swimming around under the cold, cold water, a tiny bit of Alaska magic might happen.

(Teacher bleaches the water, while their eyes are closed, and continues to talk about polar bear swimming while the bleach takes effect.)

Polar Bear decided NEVER to change his color again. After all, polar bears are supposed to be WHITE, RIGHT?

Play a color memory “Fish” game by gluing colored squares to the bottom side of a fish cutout. The teacher says, “I’m looking for red.” Students take turns turning over a fish and naming the color until the red fish is found. Play continues until all colors are found. 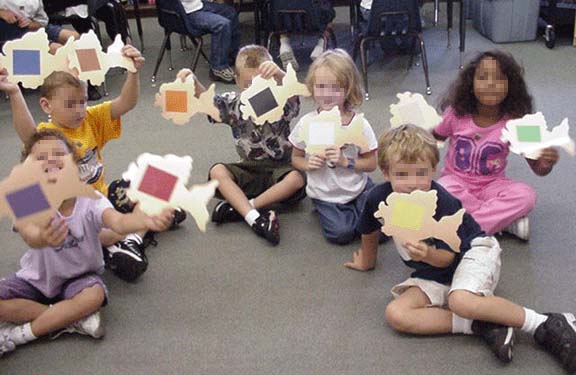 Before reading The Crayon Box That Talked, open the flap of a new box of crayons and pretend the box is talking to you.

Use a clear cup and let the kids guess what the combination of two primary colors will make. For example, we’ll read “Little Blue and Little Yellow” after the experiment of combining blue and yellow.

Have a color day when you’ve finished working on a color. The children wear clothes of that color and bring something of that color for show and tell.

Back to School Bestsellers