The family homework was an Animal Report. I sent home a Zoo Book magazine and they answered some questions about color, size, food, how the animal moves and one interesting fact. They also made a picture of the animal.

We each contributed a sentence to a patterned chart.

The next day we cut apart the words in our sentence, put them back in order and drew a picture of our animal. We will make these into a class book about zoo animals.

The children used zoo stamps to make a picture at the top of the page and then wrote a sentence or two about the zoo. They are using phonetic spelling as they write and sound out the words. They also used our word wall as a reference to spell some of the words. 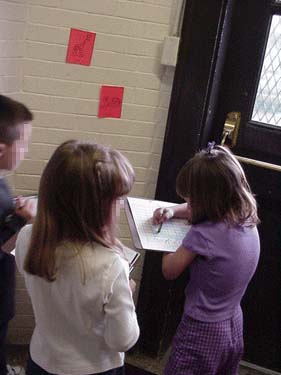 I love this activity–an animal safari! I tape pictures of animals throughout the school halls. Then I pass out clipboards and the graph above and we go through the halls, coloring in one box as we find each animal. We made a second trip through the halls to collect the animals and then we made them into a floor graph in our classroom. We compared our own graphs to the floor graph.

These aren’t the same pages used in the pictured activity, but you could use these zoo printables for your own zoo animal hunt/safari: 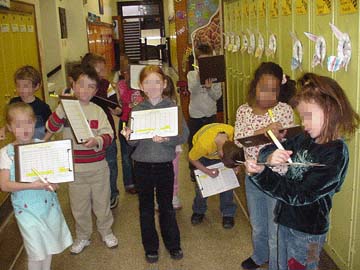 These jungle animal erasers were purchased from Oriental Trading and used to practice addition story problems.

The mat consists of five circus pedestals (boxes). We used this to practice ordinal numbers. “Put the elephant on the first box.” “Put a giraffe on the fifth box.”

Use foam animals to make a pattern (ABB).

Rubber snakes were placed on this addition math mat to help solve a problem. Any other water animal could have been used (frogs, ducks, goldfish crackers, etc.) The addition mat could be changed for each theme, such as a barnyard for farms or zoo cages for zoos.

Students put two animal erasers in an egg carton (half dozen carton). Dot labels with the numerals 1-6 written on them were stuck in the bottom of each section. Students closed the carton, shook it and opened it up.

Then they had to fill in an addition problem template to demonstrate adding the two numbers together. They also had to use animal erasers to demonstrate their answer. 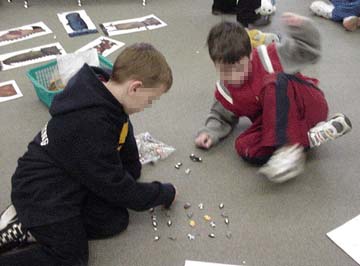 Animal erasers were layed out in rows of five so they could count to 100 by fives.

Stamping animals was fun. We did them randomly, but they could have been done in a pattern.

I copied the animal bodies on cardstock and then the children added clothespin legs.

Crayola model magic is pressed into cookie cutters to make animals. We used markers to color them after they dried. 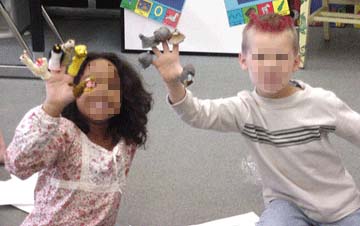 Use finger puppets to make up an animal story.

Use blocks to create cages for stuffed animals. 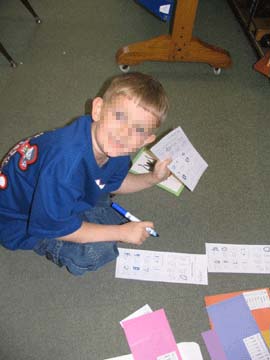 This is one of the Evan Moor Take It To Your Seat Math Centers. (They come colored and ready to go except for cutting and putting in a bag or envelope.) At this center, the boy looked at pictures of zoo animals and counted how many eyes, noses, mouths, legs and tails the animal had and marked it on a paper. 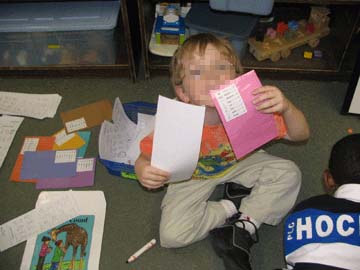 He is showing how to check if your answers are correct by looking at the back of the animal picture card.

Punch holes in a lunch tray to make these animal cages. The animals were cut from another paper and then bushes or trees were made from construction paper. I taped the black yarn to the back of the tray and they pulled it through the holes.

This was certainly not one of our most successful food projects. This is supposed to be a zoo cage, with animal crackers for the animals and licorice for bars. Next time I would use chocolate frosting on the graham cracker and unfrosted animal crackers, but I still like the idea.