The Little Old Lady Who Swallowed a Fly

Be Nice to Spiders by Margaret Graham

Charlotte’s Web by E. B. White

Anansi the Spider: A Tale from the Ashanti by Gerald McDermott

Anansi and the Moss-Covered Rock by Eric Kimmel

Spiderlings hatch from eggs.
Each one has eight tiny legs.
A spider has more eyes than you.
Most have eight, you have two.
A spider has two body parts.
Across its web it quickly darts.
From a spider’s spinnerets
Sticky spider silky jets.
Spiders feel the frantic tugs,
Of their favorite food: it’s bugs!

Little Miss Muffet
Sat on a tuffet,
Eating her curds and whey.
Along came a spider
Who sat down beside her
And frightened Miss Muffet away.

Spider on the Floor
(Raffi)

But he jumps off. NOW…

The Spider in the Web
(tune of Farmer in the Dell)

Criss-Cross Applesauce
(Children sit in a circle facing the next child’s back.)
Criss-cross applesauce.
(make X on another person’s back)
Spiders crawling up you spine!
(crawl fingers up back)
A cool breeze
(blow softly on back of neck)
A soft squeeze
(softly squeeze arms)
Now you’ve got the chillies.
(tickle back)

Make a page with each child’s photo on it and the poem below (insert child’s name on each page.) Have students use a black marker to draw a spider on their head. Make copies of the book for the students.

The Old Lady Who Swallowed A Fly

This booklet is in the shape of a spider web. Students cut and paste facts about spiders.
The Mailbox PreK, Oct/Nov 1992

Spiders!  – This is a factual cut and paste booklet about spiders.
I Can Make It! I Can Read It! Fall, Preschool-Kindergarten (TEC3512)

This is a small group game. Write the letters s-p-i-d-e-r at the bottom of a picture of a spider web. You could also draw a spider above the letters. Make enough copies for the small group. Cut the pictures vertically to make a spider puzzle. Show each person in the group a flash card in turn. If they can read it, they can put out the ‘s’ piece of their puzzle. Continue until everyone has completed their spider puzzles.

Have the children trace and cut spider bodies out of tagboard, tape on pipecleaner legs (to the head as is scientifically correct). Then tape on a piece of straw about the length of the spider body.

Cut 15 feet of fishing line for each child. Tie 1inch pieces of drinking straw to each end of the fishing line. Fold the fishing line in half and thread the looped middle through the straw taped to the spider’s body. Pull it all the way out (till you get to the short straw pieces) through the top of the straw. Tape that loop to a wall or doorway.

Have the child stand a few feet away and, with one straw end piece in each hand, right under the tagboard spider, have the child move his arms apart quickly, forcing the spider to glide up the fish line to the top where it is taped.

Children may add details as they wish–draw curtains in the windows, flowers, etc.

Finally, have children put the spider ring on the straw and tape the straw to the side of their house, one piece of tape at the top and one tape at the very bottom (flexible straw may be positioned much like a downspout).

Now have them sing the Eency Weency Spider song and move their spider up and down the spout.

You could print the words to the nursery rhyme out and glue them on the house.

You may also add a circle attached with a brad fastener to the top of the paper. Color a sun on half the circle and rain on the other half. Turn the circle halfway to show “down came the rain and washed the spider out”. Then turn it the other way to show “out came the sun and dried up all the rain”.

Give each child a spider body and eight legs. As each child reads a flash card, he can attach one leg to the spider’s body.

Draw two spiders on the chalkboard with a body and eight legs. Divide the class into two groups. Show first person in each line a flashcard. Have them erase one leg, then an eye, mouth and body part of each spider if the answer is correct. First team to erase the spider is the winner.

Make a class web to encourage cooperation. Begin with a ball of black yarn. Roll the yarn back and forth, having each student hold their portion of the web until it is complete. This song may be sung to the tune of “Row, Row, Row Your Boat” as you make the web.

Round and round we go.

Up and down and all around,

Weaving to and fro!

Use a spider body and eight leg pieces to show the various combinations that make eight. For instance, put 5 legs on one side of the body and 3 on the other side to make eight. The children could then demonstrate this with two colors of unifix cubes.

Make a spider body with detachable legs (or draw one on the chalkboard). Say, “I am thinking of a number between 1 and ___.” Students get eight chances to guess the number. Teacher removes one spider leg for each incorrect guess.

A spider’s head is colored and glued to a sentence strip fit to each child’s head. Accordion fold eight black strips for legs. Staple them inside the headbands. 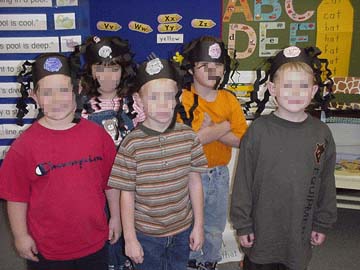 Cut about 16 slits around the edges of a brightly colored paper plate (orange, lime green). Tape a long piece of black yarn to the back of the plate. Then weave the yarn back and forth across the plate’s front to form a web. Tape down in back and accent the web with a spider ring.

Paint palm and four fingers of child’s hand with black paint. Put hand down on paper with fingers spread to make 4 spider legs. Paint again. Turn paper around and put palm over same area, but fingers facing the opposite direction. This looks nice as a block on a Halloween quilt.

Cook about 2 lbs. of spaghetti.  When it is cool, put it all in a large bowl with Elmer’s Glue.  Let the kids mix it with their hands. Then they pull individual strands of spaghetti out and design their web on a piece of wax paper.  (You might want to have a spider web pattern under the wax paper for children who have difficulty).  When the web is dry, VERY CAREFULLY peel the wax paper away from the web.  Add a spider ring in the center and hang the completed project from a string!

Use thumbprints to make spider’s body and then draw on 8 legs.

Draw a web on black paper and then trace the web with glue. Let dry and add a spider sticker or glitter spider.

Cut two black circles for the spider’s body. Glue orange dots to the circle. Accordion fold 8 strips of black paper for the legs. Attach a string and hang from the ceiling.

Cut cardboard egg cartons into six sections, each having two egg cups (the two parts of the body). Paint the cups and glue on wiggly eyes. Poke four holes in each side of the body and slip pipe cleaners through. Bend to make the legs.

Use a twist tie on a black spoon to attach a Tootsie Roll pop to the spoon. Glue a black pompom with wiggly eyes to the other side of the spoon for the head. Wrap four black pipe cleaners around the spoon handle for legs.

Make a giant spider and attach to your classroom ceiling. Stuff a large black trashbag with newspaper and tape closed (use black electrical tape) to make the spider’s abdomen. Fill another black trash bag about one-third full, tape closed and cut off the excess to make the spider’s head. Tape the two body pieces together. Cut eight white circles (two large and six small) and glue them to the head. Use black yarn to attach the spider to the ceiling. Use eight lengths of black crepe paper to make spider’s legs. Attach one end of the leg to the spider and the other end to different parts of the ceiling. Post this poem near the giant spider:

This creepy, crawly spider traveled to our school.

He walked right in the door ’cause he knew this place was cool.

He crept into our classroom to teach us what he knew—

That spiders are our friends, and they can help us, too.

Put a new label, ‘Spider Soup’ on a can of chicken noodle soup. Crush oriental noodles in a bag. Tell the children they will be having spider soup for a snack. Pour the soup into a crock pot and add the water as usual. Explain that we’re going to add a few spider webs. Put the crushed noodles in also. Yummy!

Cut two bread circles. Spread with peanut butter. Use 8 pretzel sticks for legs sticking out the sides. Use raisins for eyes and a mouth.

Spread frosting on cupcake. Press the gumdrop in the middle of the frosting. Add 8 pieces of licorice for legs.

A spider snack is made from Ritz crackers, peanut butter, pretzels sticks and M&Ms.

Preheat oven according to pizza dough instructions. Divide the pizza dough in half. Form one half into a circle and place on greased cookie sheet (spider’s body).  Divide the other half of the dough into eight pieces and roll into cylinder strips for legs. Attach the legs to the body on the cookie sheet. Spread sauce on ‘body’ and sprinkle on cheese. Slice olives into slices and sprinkle over body for spider hair. Add two tomato slice eyes with a whole olive for the pupil. Bake for 15-20 minutes.