Ears Lookin’ at You Kid!

Make a giant turkey.  Take long strips of construction paper (about 2″X9″) and glue on a piece of paper that says “Thank you for _________”, said Jake Turkey.  Glue a small photo of the child at the very end of the “feather”.

We each made a square for our quilt. 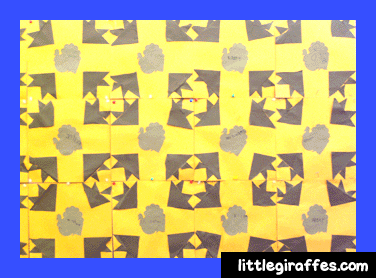 Use a half pint of heavy whipping cream and a dash of salt.  Put into a container with a lid. Put heavy tape around the lid to prevent leaks. Each student counts to 20 as he shakes the cream and then passes it on around the circle. Shake until cream turns to butter. (You will have to pour off a little liquid.) Serve to students on crackers.  They can chant one of these poems as you shake.

Use a half graham cracker as a base. Use frosting or peanut butter to adhere a bugle to the cracker. Fill with Trix cereal fruit pieces.

1 cup of whipping cream whipped with 1-2 tbsp. sugar and 1 tsp. vanilla (or use one can of whipped cream)

Divide dough into 3 pieces and on wax paper roll each into a 12 inch round about 1/8 inch thick. Put on a baking sheet or pizza pan. Next, in a bowl mix pumpkin, eggs, sugar, spice, cream, and salt until well blended. Spread 1 cup on each pizza dough, leaving about 1/2 inch from the edge. Bake in preheated 350 degree oven for about 20-25 minutes.  When it comes out of the oven and cools slightly, decorate with whipped cream, chips, candied nuts, raisins, and marshmallows.

Cream the butter with the sugar in a mixing bowl, blending well. Then add the egg and slowly mix the flour and salt a little at a time. Mix until a smooth dough is formed. Chill for a couple of hours or overnight.  This dough can be made in a food processor. (It also freezes well, but divide in three pieces before freezing.)

Combine the cream cheese with the cheddar cheese. Form into a ball and roll in the sunflower seeds. Chill in refrigerator for a couple of hours. The celery and carrots become the turkeys feathers by pushing them into the cheese ball. The head of the turkey is made by attaching small pieces of apple and celery to the ball with toothpicks. Serve on crackers after removing the toothpicks.

The following feasting ideas are some suggestions I’ve saved over the past few years. Maybe something will work for your class!

Make a Pilgrim hat or bonnet and a  Native American headband and vest. Then allow the children to choose one to wear to the feast, and they have an extra something to take home.

Each child brings some fruit from home (these could be sorted and graphed). Then we make a huge fruit salad with

These are just hot dogs, but stick a turkey head and tail feathers on toothpicks in the hot dog on the bun to look like a turkey. Have the children color them a few days before. Parents can bring in a salad or dessert for the feast.

Students wear Indian costumes they’ve made at school (headbands, grocery store vests, beads). Parents are invited to be the Pilgrims. Children share some songs/poems about Thanksgiving and make an I Am Thankful book to read to their parents before the feast.

Set up long tables for serving the food and spread many long table cloths on the floor as a place for children and parents to eat. Serve popcorn, corn bread mini muffins, pumpkin pudding with whipped cream, and apple or cranberry juice.  Make the pies and corn muffins at school. Parents are asked to help by sending in paper goods, canned pumpkin, cornbread mix, tablecloths, whipped cream, and juice.

Send home a form announcing the feast at the beginning of November. Have a cut off at the bottom asking how many will be attending and if they would be able to help by sending in something. About two weeks before the feast  assign the parents who offered one item to send it in.

To feed an entire class of about 20 parents sign up to bring in:

The class knows that they will only be Tasting – not gorging! They get ONLY one small spoonful of each item. IF they finish it and want more, they can have more until it’s gone. We let the ‘slab’ of turkey deli slices lay on top of each other and just score it into about 1″ square pieces. All food comes to school in a microwavable container. The parents warm the food in the Staff Lounge’s microwave during recess. Then we sit down to our Tasting Feast. The kids know they’re only getting a tiny bit and they have permission to just TRY it — it’s ok if they don’t LIKE it. And so often…..they do finish it. We have very very little waste. Again, since they only get a BIT (and that’s really really hard for the parents to just put such a little bit on the plates), the kids who really want more are able to have more. A-n-d….many kids will finish their little ‘bit’ – even though they don’t care for it and don’t want anymore. Afterwards, either later that day or the next (we always have our feast on the day before our last day), we vote on 2 graphs — Our Favorite Feast Food and Our Didn’t Like It Feast Food. (again – giving permission to them to ‘not like’ something!

We serve only food that we’ve cooked ourselves. Some of the items on our menus in recent years have included: applesauce, cranberry sauce, microwave popcorn, pumpkin muffins, corn muffins (mini sizes on both), slice & bake pumpkin cookies (from Halloween) and apple juice.