Draw pictures on the chalkboard. Allow children to complete the rhyming word and then erase that picture part. These rhymes came from barb on Teachers.net.

AB CDE
Pumpkins as orange as can be.
FG HIJ
Halloween is on its way!
KL MNO
Children’s feet on the go.
PQ RST
Costumes cute as can be.
UV WXY
“Trick or treat”, they all cry.
ZZ ZZZ
Candy for you and me!

The girl gets to throw a pumpkin beanbag in the witch’s pot for every flashcard she could read. 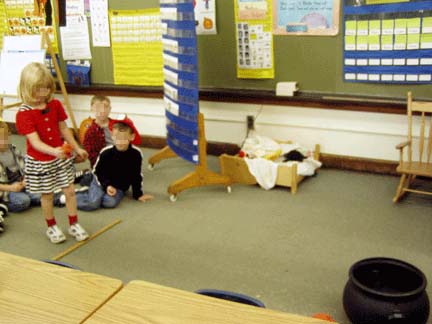 The children get to put one piece of their spider puzzle on the orange mat for every flash card they can read. You can continue the game by making the spider disappear one piece at a time.

A Haunting We Will Go

Divide the group into four smaller groups and assign each group one of the words listed below. Read the story. After each of the words is read pause for the group to make the appropriate response.

Now, everyone knows that a group of kindergartners won’t fit through one door at the same time, but they sure tried. And when they all did come out the whole front wall of the house came with them, making the old house start to fall down, and as it fell, you could hear the GHOST___ and the WITCH___ with her BLACK CAT___ saying, “Where do we go a haunting now. It’s almost HALLOWEEN___, too!”

Maybe they will come to haunt your house!

Color Mr. Candy Corn  in traditional orange, yellow and white. Draw a face and put on accordion folded arms and legs. Use wiggly eyes or white reinforcements for eyes.

The styrofoam ghost is simple. The children make the face with a a black marker. Punch a small hole in the bottom if you want them to hang from the ceiling. Place the cups on a cookie sheet and put in a 350 degree oven. Let them melt. This will take about 5 to 15 minutes, depending on how much you want them to shrink. Each one will be different.

Use photo software to insert children’s faces on seasonal clipart. 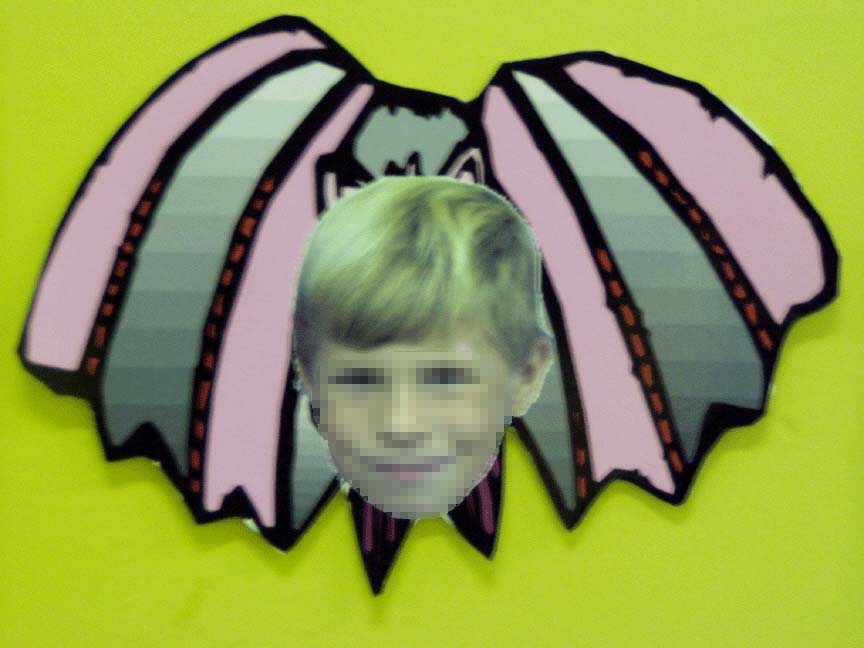 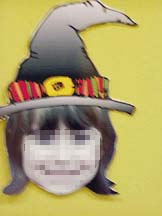 We made haunted houses by gluing wood pieces together. The houses were painted black and then decorated with styrofoam packing peanut ghosts, small pumpkins, Halloween glitter spiders and spider webs. This idea came from Mrs. Critchell’s site: http://www.kinderteacher.com.

After the houses were complete, we made a chart that sequenced the process.

Spray paint lima beans and draw on faces to make ghosts, jack-o-lanterns or goblins to use for patterning, counting or problem solving. The story board mats are from Box It or Bag It Math.

Use Halloween candy and erasers for sorting, patterning and graphing activities. (Yes, there is a mistake in the pattern!)

We made a Halloween necklace in an ABC pattern.

Use Halloween "glitter" to make a pattern on a seasonal blackline.

For a measurement and counting activity cover a ghost with pieces of popcorn.

These ghost patterns came from Mailbox magazine. The two arms are partially cut away from the body, folded in opposite directions to make the ghosts “helicopter” as they fall, and a paper clip is added to the bottom for extra weight. The arms can then be refolded to make the ghosts spin the other direction when they fall. 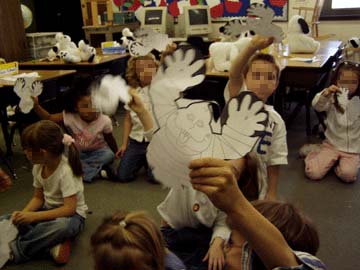 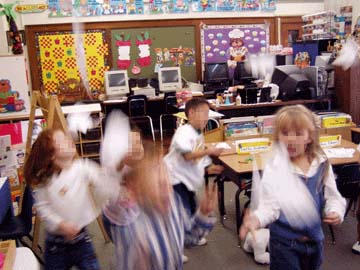 Talk about what a polymer is and then make one or two of the following:

Cup #2
Add about an inch of laundry starch.

Then slowly drizzle green glue into the starch.
Fish out the gopher guts with your fingers.

This is edible. Cornstarch will harden in your drain so throw it in the trash when done.