In the Sky: A unit about the sun, moon, and stars!

Here is a fun early childhood unit for learning about space, the solar system, and astronomy.

Children get to throw a beanbag into the Earth tub, the Moon tub, or the Sun tub for reading a letter, word or number flashcard correctly.

She is shining the flashlight (representing the sun) on the earth. It is day on the side of the earth where the light shines and night on the other side.

We are acting out being the earth by all facing the sun (on the floor). Right now it is daytime. 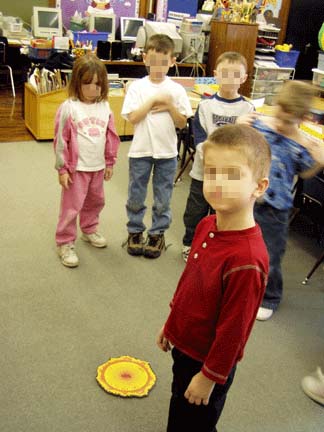 When we face away from the sun, it is night time because the sun is no longer shining on us. 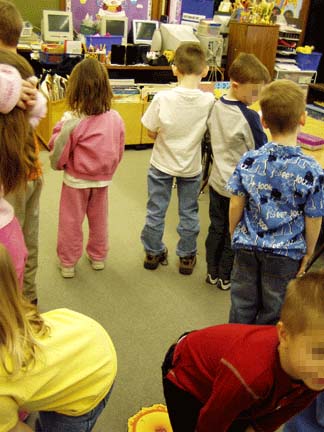 We made model magic spheres in three sizes to represent the sun, moon and earth.

She is putting triangle sun rays on the pocket we created by stapling one-half a paper plate to a full plate.

We made these into necklaces that hold fact cards about the sun.

The sun is made of gases that are constantly in motion. We swirled yellow, red and white paint to represent these gases.  Then we dipped a white circle into the paint…

…and made sun prints by laying it on another paper.

We put it on top of a sentence we had written about the sun.

Pairs of students shared a space station work mat between them. I put some cubes (pretend astronauts) on the mats.  Each pair of students estimated how many “astronauts” were on their space station. Then they counted and we recorded the actual amount.

One student in the group made a stack of ten cubes and the other student counted on from ten to see how many “astronauts” they had.

Star stickers were used to make these constellations. If possible, make a transparency of the page with just the stars in place and have the children match the same constellations.

It was this in the dark. One child holds the flashlight (a pretend star) on another child. When he is close, the star looks brighter. As he backs up, the star seems dimmer. Then the lights are turned on–can you still see the light from the star? Do stars still shine during the day? 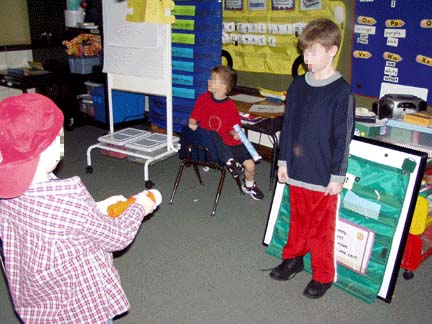 We covered a paper towel tube with stars.

We used a push pin to poke holes in black circles to make constellations. (A styrofoam tray was used for backing.) We did several of these. 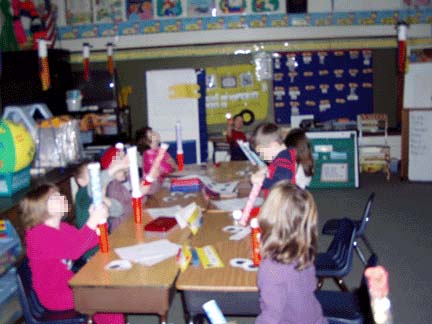 Use model magic to create the different phases of the moon.

The boy is pouring glitter into his “star jar”. The glitter represents the millions of stars in the sky.  The jar is closed and a poem is glued to the top.

Phases of the Moon

Take a chocolate chip cookie (the chips are craters in the moon) and nibble away the different phases of the moon–beginning with a full moon of course and then nibbling it and stopping at each phase until it is a new moon (all gone).